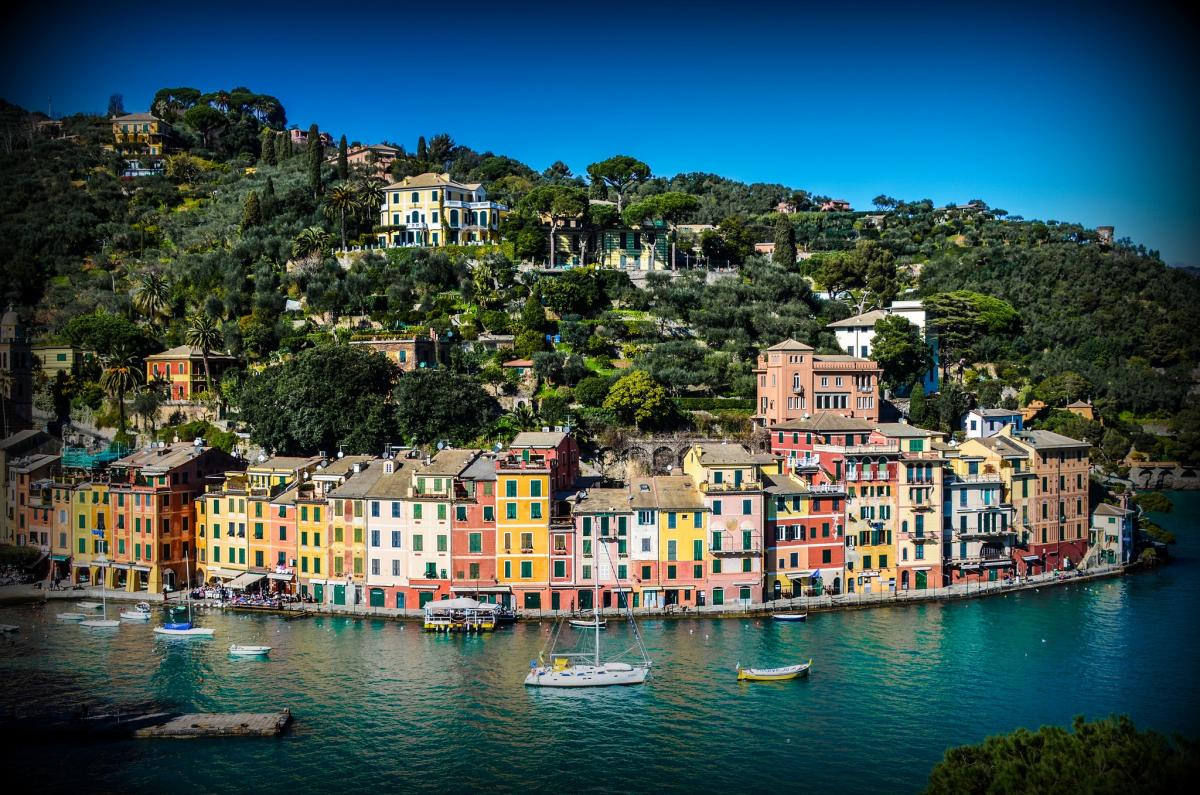 This itinerary takes you to the enchanting Riviera di Levante – also known as “The Coast of the Rising Sun – a popular destination for travellers and tourists since the time of Byron and Shelley. The journey begins in the vibrant seaside resort of Rapallo and continues to Santa Margherita Ligure, Paraggi and Portofino, all situated along the coast of the Gulf of Tigullio.

Part of the Italian Riviera, the Riviera di Levante extends eastward from Genoa to Capo Corvo – which is close to the border with Tuscany – and is particularly known for the charm of its old fishing towns and the beauty of its landscapes and seascapes. It is a glorious and rugged stretch of coast covered with pine and olive trees, a sequence of dream bays and appealing seaside resorts representing Italy throughout the world. We already introduced you to the Cinque Terre in a previous article; in this new blog post, we will talk about Rapallo, Santa Margherita Ligure, Paraggi and Portofino, all located along the coast of the celebrated Gulf of Tigullio.

Included in the Parco Naturale Regionale di Portofino, Rapallo is the largest town of the Gulf of Tigullio and has always been known for its climate that made it over the years the favourite Winter residence of the wealthy Italians living in northwestern Italy. Friedrich Nietzsche's ideas for “Thus Spoke Zarathustra” first came to him while walking in Rapallo, the writer Ezra Pound spent much of the late 1920s and 1930s living and writing in the town. Probably of Etruscan (or Greek?) origin, Rapallo became a Genoese dominion in the first half of the 13th century and took part in the famous Battle of Meloria which marked the decline of the Republic of Pisa. In the 16th century, the town was sacked by the Ottoman corsairs and the Genoese responded by building the beautiful Castello sul Mare (meaning “the Castle by the Sea”), that is now one of Rapallo's best known visitor attractions. Other places of interest include the Basilica dei Santi Gervasio e Protasio, the Museum of Lace, Castello di Punta Pagana and the ruins of the Monastery of Valle Christi. If you love hiking, we recommend you walk to the Montallegro Sanctuary, from which you can enjoy wonderful views of the Gulf. With that being said, Rapallo has also some beautiful beaches, two marinas and numerous sports facilities; the old town continues to have a maritime feel and is studded with shops, restaurants and cozy cafes.

Located 3.5 km southwest of Rapallo, Santa Margherita Ligure began to flourish in the 17th century – when the Genoese aristocracy built marvellous villas there – and became a popular tourist destination after World War II. Less crowded than Rapallo and cheaper than Portofino, it is the perfect place to stay while visiting the Gulf of Tigullio and/or the Coast of the Rising Sun. Bright, friendly and quiet, Santa Margherita materializes like a beautiful Impressionist painting, with its colourful Liberty style buildings overlooking the seaside promenade and the palm trees waving in the breeze;

the old town – now a pedestrian zone with shops and excellent restaurants – is a nice place to stroll and boasts some charming historic edifices, an outstanding Baroque church and some lovely piazzas. Santa Margherita Ligure's top tourist attractions include the Castle built by the Republic of Genoa in 1550 (designed by the same architect behind that of Rapallo), Villa Durazzo Centurione and its 17th-century gardens and the marble statue of Christopher Columbus, seemingly pointing towards the New World. The best excursions within reach of the town are Nozarego – a spectacular natural terrace over the Gulf of Tigullio – Cervara Abbey – a National Monument located on the road to Portofino – and the wonderful Bay of Paraggi, with the only sandy beach in the area and a shipwreck from 1917.

According to Pliny the Elder, chic Portofino was founded by the Romans and named Portus Delphini due to the large number of dolphins that inhabited the bay. Originally a fishing village, it has been attracting visitors since the end of the 19th century and became a favourite destination of the international jet set in the 1950s, when everyone – from the Duke of Windsor to Brigitte Bardot – came here to sunbathe and enjoy La Dolce Vita. Suspended between the intense blue of the sea and the green mountains, “the Italian Saint-Tropez” sits on a picturesque peninsula and has a gorgeous town square with pastel-coloured houses overlooking a fairy-tale marina; romantic and sophisticated, it gets particularly crowded in the Summer and at weekends, with tourists who come here to take a break, shop and spot the rich and famous. Hotels in Portofino are comfortable, quiet and heavily priced; however, a drink by the harbour or a walk around the village streets can be easily enjoyed on a day excursion from Milan or Genoa. Don't miss Castle Brown and its spellbinding gardens: located on the tip of the headland, this 16th-century fortress offers fantastic views of the village and its immediate surroundings. Finally, if you feel like exploring further, a magical day trip from Portofino is the Abbey of San Fruttuoso, a jewel of medieval architecture that overlooks a secluded cove and a wonderful pebble beach.

The best way to explore the Gulf of Tigullio is definitely by car. However, if you are visiting Milan and feel like joining a group tour to Genoa, Santa Margherita and Portofino, you can contact www.ciaoflorence.it for details.