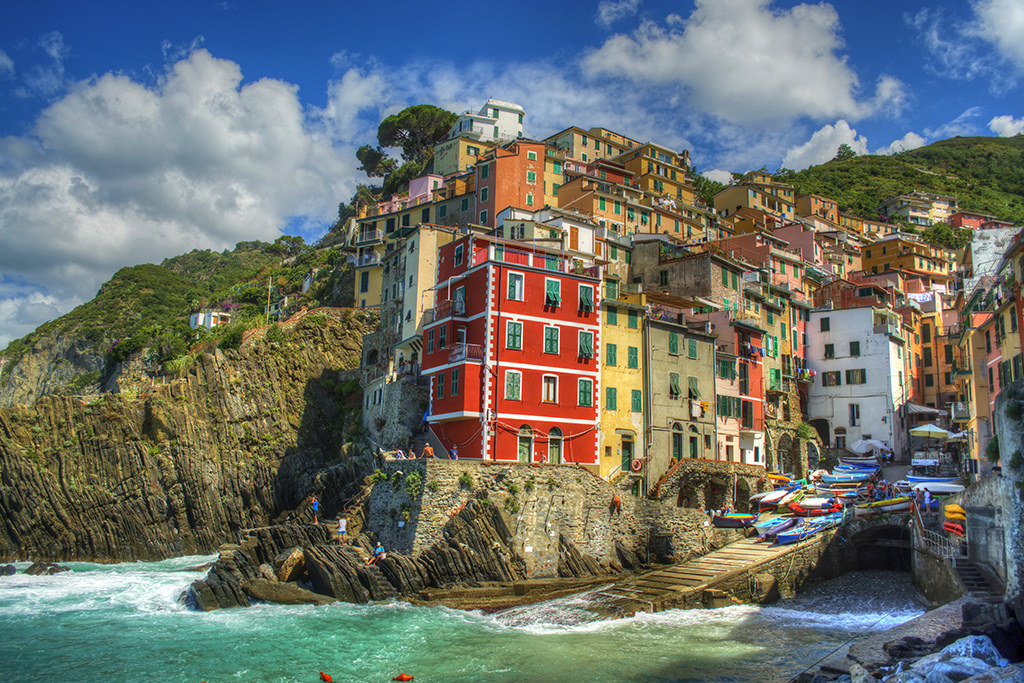 A UNESCO World Heritage Site since 1997, Cinque Terre is a very jagged, steep section of Ligurian coastline stretching between Punta Mesco and Punta di Montenero and comprising the villages of Monterosso al Mare, Vernazza, Corniglia, Manarola and Riomaggiore. Over the course of nearly two millennia, man has transformed these seemingly rough, unwelcoming headlands into a heavily terraced landscape in order to successfully grow vines and olive trees.

The scenery here is so stunning that it has inspired countless artists from around the globe: Dante Alighieri compared these sheer cliffs to the Mountain of Purgatory (Purgatory - 3rd canto), Francesco Petrarca celebrated Cinque Terre's vineyards in his epic poem Africa, Martin Scorsese filmed here some scenes from The Wolf of Wall Street.

The villages in brief

Generally grouped around churches or castles, all five villages date back to the Middle Ages and can be easily reached by train from La Spezia or Levanto. Of course, you can get off the train at Riomaggiore or Monterosso al Mare and get around the villages by water or foot.

Riomaggiore – the easternmost village – was built in the 8th century by some Greek settlers fleeing persecution in Byzantium and nowadays it houses the Cinque Terre National Park main office. Its buildings – painted with typical Ligurian colours – line the narrow valley of the Maggiore stream and overlook a picturesque little harbour. Major tourist attractions in Riomaggiore include the Torre Guardiola (an old fort converted into an Environmental Education School where you can go birdwatching) and the Montenero Sanctuary (consecrated to the Virgin Mary of Montenero and reachable only on foot).

From Riomaggiore you can get to Manarola by train or by following a romantic walkway carved into the rock high over the sea: the Via dell'Amore. Like Riomaggiore, Manarola has brightly coloured buildings and a charming little port. Besides its beauty, the village is famous for its sweet wine named Sciacchetrà, celebrated by Gabriele D'Annunzio in one of his poems; from December 8th till the last week of January, Mario Andreoli's illuminated outdoor nativity scene - the biggest in the world - is set amidst the vineyards overlooking Manarola.

Compared to the other villages, Vernazza looks more like a fishing town, thanks to its larger harbour and tradition.

Established around the year 1000, it was determinant in Genoa's conquest of Liguria, providing secure landing point, fleet and soldiers. Lined with colourful buildings and cozy little cafes, Vernazza's main cobbled street (Via Roma) links the port with the railway station; situated on the top of a rocky spur that protects the village from the sea, the Doria Castle offers priceless views over the bay. Places to visit in Vernazza include the Church of Santa Margherita d'Antiochia and the Sanctuary of the Madonna di Reggio.

You can reach Corniglia by climbing the Lardarina – a steep brick stairway with 382 steps – or by following a road which, from the train station, leads to the village. Perched on a rocky promontory, surrounded by vineyards and terraced fields, Corniglia stretches along its main street (Via Fieschi) and its buildings (shorter than those of the other Cinque Terre villages) have one side facing this street and the other overlooking the sea. From St. Mary's Terrace (reachable from the main square Largo Taragio) you can enjoy wonderful views of Riomaggiore, Manarola, Vernazza and Monterosso al Mare.

Accessible by car, Monterosso al Mare is made up of two parts - the old town (9th century) and the new one (Fegina) – linked by a tunnel that burrows beneath the promontory of San Cristoforo. Its most prominent features are the Church of St. John the Baptist (built between the 13th and the 14th century), the 17th-century Capuchin Monastery and the Giant: a huge statue that gives the illusion of supporting the weight of the cliffs. Beyond a shadow of a doubt, Monterosso al Mare is the least charming of the quintet, but it boasts a very nice (and long) pebble beach.

If you are thinking of visiting the Cinque Terre by yourself, remember to check out the status of the trails (due to the terrible floods and mudslides which involved the villages in October 2011, some paths are still closed).

If you are visiting Florence and you feel like going on a group tour to Cinque Terre, contact www.ciaoflorence.it for details.